Blockchain-powered Payment Remittance Platform: How can it Facilitate Cross-Border Transactions? 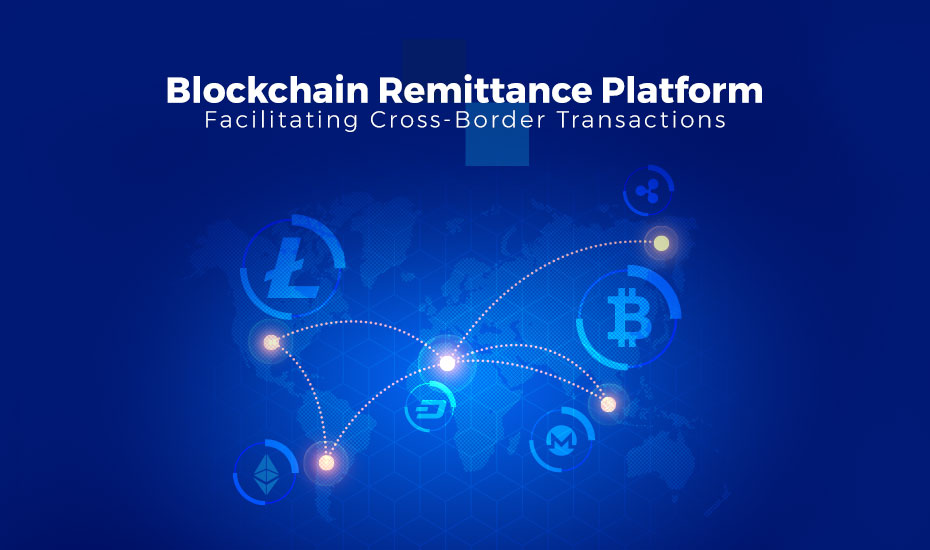 Remittance is a fund-transfer transaction that involves moving the funds between two accounts within the same or other financial institution.

In a cross-border transaction, Society for Worldwide Interbank Financial Telecommunication (SWIFT) is charged with moving the messages along the payment chain. The correspondent banks handle all of the debits and credits across accounts based on the message, thereby passing on the value to the final beneficiary.

For example, a bank in America (bank A) sends a specific amount of Euro to a European bank (bank D) in Germany. This is how the fund transfer will be carried out.

Problem with the Conventional Method

In the current cross-border payment system, banks have their centralized ledgers to record transactions. Centralized ledger means that the bank has complete control over which transactions are posted on the ledger. Since no two banks can agree on the transactions based on their ledgers, SWIFT came into existence to guarantee and confirm the transmission of messages.

This process for cross-border payments has the following shortcomings:

Since the ledgers are centralized and thus local to the banks, SWIFT transmits messages to ensure that the debit entry of one bank’s ledger is effectively communicated to another bank’s ledger in order to post or pass the corresponding credit entry in its ledger. SWIFT charges a fee for transmitting the messages. With the increase in the number of messages, the fee increases. Both the banks whether at the receiving end or sending end incur a fee charged by SWIFT.

Every cross-border transaction has to traverse through correspondent banks responsible for handling activities like receiving and collating payment messages before retransmitting confirmation or denial to the respective bank. This increases the settlement time of transactions.

In case of cross-border payments for pooled accounts, the originator of the message is amended and populated by an internal bank account number, which raises data protection and security concerns in the receiving bank.

As the payment moves across various payment systems, the messages pertinent to a transaction are varied and different.

How can Blockchain facilitate Cross-Border Transactions

Owing to the limitations of the conventional process for cross-border transactions, blockchain and distributed ledger are resonating among banks and financial institutions.

This forged the path for direct, instant and immutable cross-border transactions by eliminating the involvement of any intermediary or correspondent bank.

The underlying concept of blockchain based money transfer enables banks to have a bilateral, transparent and immutable transfer of value, arbitrated by the settlement agency.

Blockchain will bring in the following benefits when harnessed for international money transfer.

Blockchain makes the third party functions redundant when it comes to payment processing. The transaction happens between the parties who have entered into a bilateral agreement, thereby ensuring trust.

The exclusion of SWIFT for the processing of the messages cuts down the charges along the payment chain, thus leading to cheaper transactions. Furthermore, with no involvement of any central agencies, the movement of messages is accelerated, thus reducing the turnaround time for transaction settlement.

The central banks need not ensure intraday liquidity since the distributed ledger allows the nodes in the network to have an updated copy of the balances as they are maintained in the settlement accounts with the other banks.

Given that the transaction details are encrypted and hashed, there are hardly any changes or data modification. Moreover, as the senders and receivers are the nodes in the network, the transactions are more transparent.

Dozens of Established Players have entered the Blockchain Remittance Game

Since Bitcoin’s genesis over a decade ago, many established players have embraced the concept of blockchain remittance. These include SureRemit – a by-product of SureBids, a voucher-based merchant system, GCash – owned by Philippines mobile phone giant Globe Telecom, and InstaRem – a digital cross-border payment system based in Singapore now building on RippleNet).

Western Unition and MoneyGram, two of the market leaders in traditional remittances, are experimenting with Ripple’s xCurrent. Financial institutions like American Express, UBS, Deutsche Bank, Swift, and Accenture have entered into a partnership with blockchain initiatives to experiment with cross-border payments.

Blockchain remittance platform is poised to benefit the finance market with more quick, cheap, transparent and immutable transactions. An ideal way to get started is to follow a stepwise approach. It is best to begin with intra-group payments first. Considering the volume per day, it is a step worthwhile to save cost, reduce turnaround time and leverage the benefits of blockchain and distributed ledger. Once intra-group payments are executed between banks, the process can be expanded to customer payments, before taking it to the external correspondents.

At Antier, we have a team of blockchain engineers with real-world experience delivering blockchain based money transfer platforms built using a Stellar network. Along with this, we specialize in harnessing other blockchain networks to roll out custom remittance platforms. Our solutions have been trusted with security implementations, performance and seamless scalability by SMEs and large enterprises across the globe.

To share your needs, talk to our experts or connect with us on WhatsApp or Telegram. You can also send an email to [email protected]