Why DeFi Lending & Borrowing Platform Development can be an Exciting Business Opportunity? 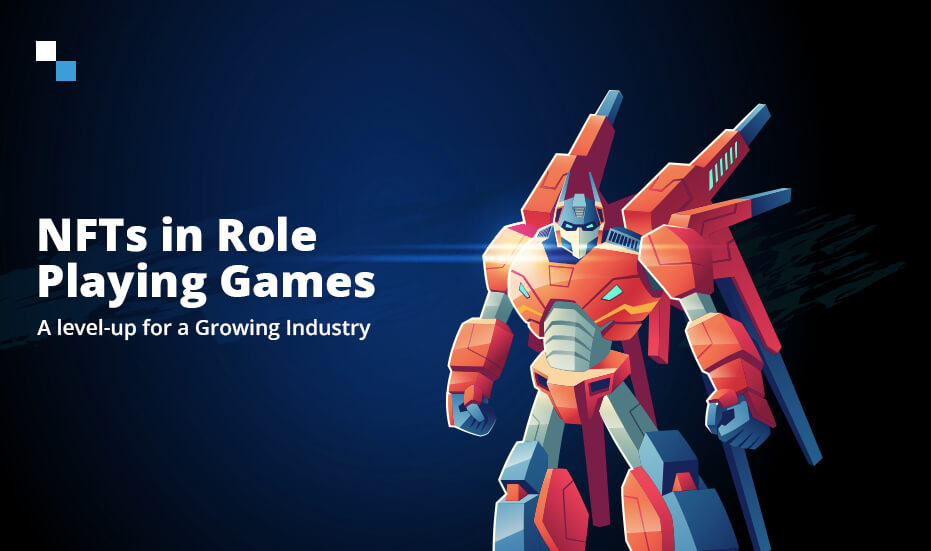 Now that we know about various use cases of blockchain, it’s time to step further and discuss NFTs in gaming. Businesses those who are gearing up for Role-playing game development must understand the undeniable influence of NFTs here. In this post, we’ll walk you through various facets of Role Playing Game development and how NFTs can elevate the overall user experience.

-What are Role Playing Games (RPG)

A roleplaying game (RPG) is a virtual game in which the player assumes the role of a character and uses them to create and live through an adventure or series of incidents, advancing their abilities through the experience gained from those events via a set of rules that attempt to reflect the whole reality of the world the character inhabits.

NFTs are a fascinating prospect as the In-game assets and awards are a popular component in RPGs that players can unlock or acquire after completing certain predetermined milestones. Moreover, few games demand players to purchase specific assets to advance to the next level.

Unfortunately, in a centralized gaming environment, there are no options to trade the assets as the players move through the game. Even worse, if the gaming company discontinues their services, the players could lose their assets.

NFTs are changing this. An NFT is a one-of-a-kind digital token that cannot be exchanged for another.

Said, because an NFT cannot be reproduced, its owner is guaranteed to be the sole owner of that digital token.

These characteristics make NFTs ideal for the gaming industry, as they allow for the creation and assignment of value to various assets. Weapons, properties, powers, characters etc and can be tokenized into non-exchangeable assets. Due to their scarcity and rarity, the gaming companies produce limited editions of these assets, making them extremely expensive.

NFTs enable players to own digital assets which they can store as collectibles or monetize on marketplaces.

This utility has increased the appeal of crypto-RPG games, which explains why so many game creators have entered the market. Due to the enormous benefits of crypto games, there is an increasing curiosity among collectors and gamers for the same. The assets earned in games are genuinely owned by the user, allowing them to:

Offering in-game assets as NFTs could significantly increase their value to players. Assets stored as NFTs give users verifiable ownership and portability, allowing them to shift their assets to an external wallet or even between games. Even for non-gamers interested in profitably trading in-game NFTs, the extra supply and demand component in secondary marketplaces can offer a compelling value proposition.

While NFT-based art has gotten most of the attention this year, NFTs for gaming have also been selling for astronomical prices. The Decentraland game’s LAND NFTs, which represent virtual real estate, have sold for nearly $1 million.

The Importance of Role-playing game development Company which can enable NFT based gaming platforms:

Given the tremendous options for gaming producers, it isn’t easy to understand why more of them aren’t jumping headfirst into NFTs and blockchain. There are some cases where traditional game makers are venturing into new territory. The blockchain-based RPG game Six Dragons, for example, has been licensed by Sony for release on the Playstation 5, even though it is still in production.

Nonetheless, the most popular NFT games are now crypto-native, with Axie Infinity leading the pack. There are a few possible explanations for this. To begin with, it has taken some time for scalable platforms to emerge that can compete with centralized servers in terms of transaction volume.

Most game developers aren’t well-versed in blockchain technology, which is a more significant barrier in Roleplaying game development with NFTs. The average smart contract coder, on the other hand, isn’t necessarily talented in creating engaging games or the complex front-end required to compete with huge titles. This is where a company like Protokol may assist in bridging the gap. We collaborate with game studios and developers to produce a blockchain solution for their portfolio and a comprehensive strategy for incorporating blockchain and NFTs into their games. We want to ensure that the blockchain strategy benefits the developer, the gamer, and other stakeholders like sponsors.

The Advantages of NFT Game Development

Digital Ownership for the Players

In-game purchases are often one-time, non-transferable items that stay within a gaming ecosystem. In a game setting, NFTs provide players control over their assets. The player can keep the game’s assets, sell them to other players, or relocate them to another platform that supports the game.

Any collector places a premium on rarity and authenticity. Through its immutable records, anyone can prove an in-game NFT asset. The distributed public ledger verifies each NFT’s number, uniqueness, and history.

A centralized server runs the majority of online games. Game assets are stored on separate proprietary systems that do not communicate with one another. Decentralized games, on the other hand, run on their blockchains. Other games on the same network use these blockchains as the backend foundation. As a result of this networking, in-game assets are represented by NFTs, which can operate in various contexts. In principle, games on the Ethereum network can support the same assets.

When the servers of a typical online game go down, the player loses all of their in-game purchases. NFTs, on the other hand, operate outside of any single gaming platform and are purely based on the blockchain. As a result, regardless of what happens in the game, a player can buy and sell NFTs. New games can be created to run on a blockchain system that already exists. Furthermore, blockchain-enabled game assets are unique and cannot be tampered with due to their permanent records.

NFTs offer a great potential to earn money for the players who like to trade their in-game assets. This gives the game owners and platform owners an additional advantage to market their platform among the gaming community. The Platform owners can project their gaming platforms as a secondary income source, which will attract those who play for fun and those who are looking for a secondary income.

Despite several challenges, the industry has enormous promise. This potential may encourage players to concentrate on or experiment with NFT Game development. These businesses can collaborate with any RPG game development Company which is familiar with the technology and can help them realize their mission. Furthermore, decentralized gaming apps’ success helps accelerate NFT infrastructure improvements and development. Hire an RPG Game Development Company today to realize your dream of becoming a Gaming unicorn in the future.