Smart contract audit: Enhancing the security of your blockchain applications Talk To Our Experts

How to Build a dApp on Tezos Blockchain

Smart Contract Audit: Enhancing the Security of Your Blockchain Applications 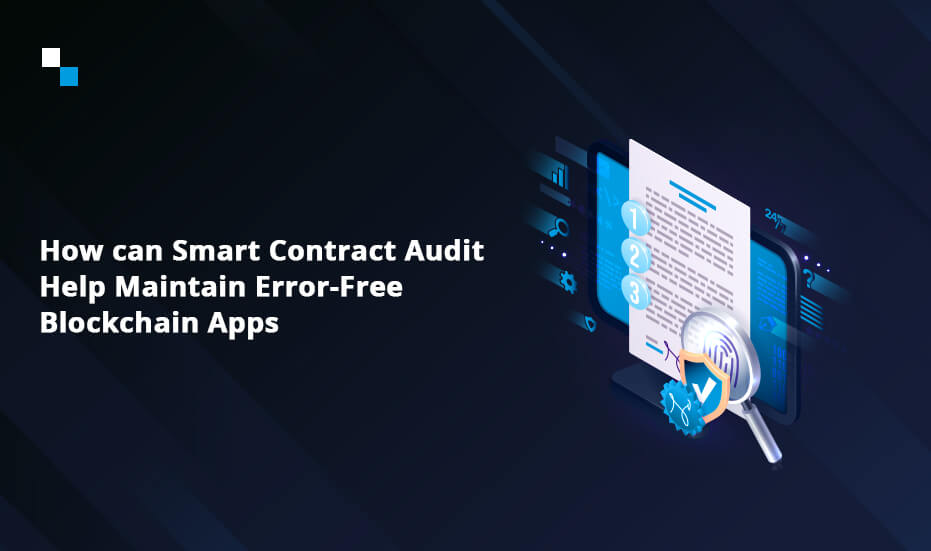 You don’t want to be left behind when smart contracts become the wave of the future. Most cryptocurrencies use smart contracts, and Ethereum is one of the largest smart contract firms in the world. Smart contracts can be used for various purposes, including financial transactions and everyday agreements. Hence smart contract audit is an important aspect for your crypto business as it helps ensure that the smart contract is free from errors and functions as desired.

What is a smart contract, and how does it work?

On the blockchain, smart contracts are stored. It is exceedingly difficult to corrupt the system because it would take substantial computational power to overrule the entire network, which is not something that everyone can attain! A smart contract is a protocol for digitally facilitating, verifying, and enforcing contract negotiations. It also makes it easier to conduct a trustworthy transaction without the involvement of a third party. Smart contracts have lately gotten a lot of interest since being first proposed by Nick Szabo. He coined the phrase in 1994, with multiple ERC standards and platforms supporting a decentralized approach to running a program.

The following are some of the essential characteristics of a smart contract:

Autonomy refers to the fact that once a smart contract is launched, the individual who initiated the transaction is no longer required to participate in the process. Because it is a decentralized system, it does not require the presence of intermediaries at the time of contract signing.

What is the purpose of a smart contract audit?

A smart contract audit is a detailed examination and study of a smart contract’s code that interacts with a cryptocurrency or blockchain. This method is used to detect errors, weaknesses, and security holes in the code and recommend improvements and remedies. Because most intelligent contracts deal with financial assets and valuables, smart contract audits are usually required.

As smart contracts regularly interact with one another, and any interactions with third-party systems can make the system insecure, such testing are difficult to do. As a result, the tests are frequently broadened to encompass additional smart contracts involved in any transactions. In most cases, such evaluations comprise manual code examination and running tests.

Smart contracts routinely deal with big sums of money, and even a minor fault or vulnerability can result in major losses. More precisely, the decentralized application’s users and stakeholders may lose all of the ecosystem’s assets.

The auditors’ recommendations are communicated to the project team ahead of time, and their responses are included in the final report. It is regarded as a symbol of the project’s authenticity and integrity. As a result, teams are eager to obtain an audit to gain user confidence and improve the project’s credibility. Typically, these audits are carried out in stages.

The first step is for the team and the auditing group to agree on the audit’s scope and specifications. It means that the auditors are provided the intelligent contract’s design, purpose, architecture, and other details.

Finally, auditors examine the code manually to determine the developer’s objectives and interpret the findings accordingly. Finally, the team issues a report detailing their findings and solutions.

Cost of conducting an audit for your smart contract

Several factors determine smart contract audit cost. The most important is whether the organization chooses to do the audit in-house or employ a third party.

Even though outsourcing a smart contract audit may have a higher initial cost, the likelihood of uncovering security vulnerabilities is likely to be higher due to their level of competence and the lack of potential biases that in-house auditors may have.

Furthermore, the size of the smart contract (lines of code) and the projected number of engineering hours necessary to execute the audit are crucial criteria that influence the price of an audit.

Another element that significantly impacts the smart contract audit cost is the auditor’s reputation. Depending on who does the audit, there is a significant difference in the quality and price of the audit.

Avoid making costly mistakes by auditing your smart contract. Time and again, the hackers will keep trying to find out loopholes in your sophisticatedly designed smart contracts. They know that a small entry to the system can give them access to digital assets and critical information.

However, your pre-emptive steps to cover the loopholes in your systems through smart contract audit can save you and your venture from such threats. Contact a Blockchain development service now to understand the vulnerabilities in your smart contracts and seek expert help to eradicate them.

At Antier Solutions, we offer comprehensive smart contract audit services to help you maintain error-free blockchain applications. Our seasoned blockchain developers thoroughly test your smart contract code to ensure there are no loopholes.

Connect with our subject matter experts to share your needs for smart contract audit.