Decoding Compliance for Security Token Offerings : US and EU Overview - Antier Solutions Talk To Our Experts 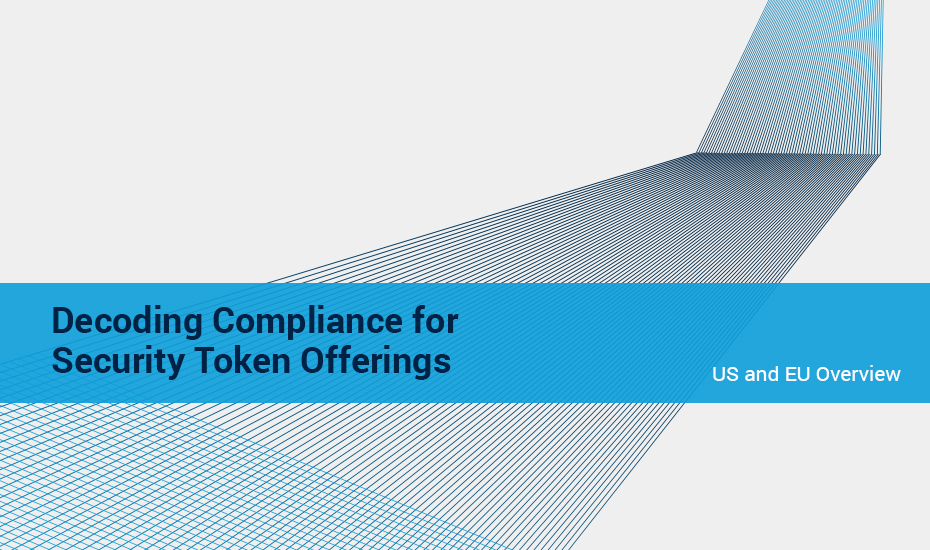 Security Token Offerings (STOs) are the digital representation of a traditional financial instrument. Convenient, because it cuts the middle-man such as banks and underwriters, yet safe, as it is backed by an underlying real World asset like property, loan, or stocks.

In the wake of major ICO scams rocking the cryptocurrency market, investors have now turned towards STOs with a hopeful eye. There is little doubt that security tokens are the future of coin offerings for they promise the proverbial ‘safety net’ to speculative sponsors.

But security cannot be ensured without regulatory compliance. Governments all over have been racking their brains to include and regulate the offering and exchange of digital currencies in their markets. Here is a peek into the regulatory structure of the United States and the European Union nations for floating a Security Token Offering.

Long story short, if you are looking to launch an STO in the US, the following regulations apply.

US securities law is quite strict. Option one is that you register your offering as a traditional public offering. The compliance is pretty tedious and time-consuming. There are, however, a few exemptions.

EXEMPTION UNDER REGULATION D: When you are exempted from registering under SEC or being regulated by it

Now, Rule 504 exempts you from registering yourself under SEC. You could pitch to any US investors under this one but it caps your issuing capital at 5 million.

Under 506(b), you can raise more capital as there’s no capping in place, but you are allowed to only pitch to accredited investors. An accredited investor is a person or an entity that is already registered under the SEC and as such is being regulated by it.

This comes with its own set of complications. As per the US securities law, to be able to apply for becoming an accredited investor, you either need to have a net worth of USD1 Million, or a reasonably high income of at least 200,000 USD per year.

This specifically limits your investor pool, but at the same time, it also protects you from becoming prey to money laundering and sophisticated white-collar financial crimes.

There is also a constant lock-in period for holding investment, and resale is restricted under Regulation D.

EXEMPTION UNDER REGULATION S: When you avoid the US altogether

You’ll still need to choose a country with strong regulation in force otherwise no one is going to invest in your STO simply because you dangle the carrot of an asset backed security. Investors need security as has been amply proved by the Bitconnect scam.

EXEMPTION UNDER REGULATION A+: When you can raise up to 50 Million and solicit to non-accredited investors

This one has been more popular because it does not carry a resale restriction. But, where the stakes are high, so is the compliance. It’s long and procedural to apply under this exemption.

The SEC requires you need to show audited accounts for over 2 years. Then, you need to file your offering and get it approved by the SEC before floating it.

EXEMPTION UNDER REGULATION CF (CROWD FUND): When you can raise up to 1.7Million with a simple procedure

This one is pretty straightforward and designed for small businesses to raise capital from within their communities.

To wrap it up, the US regulation clearly suggests that the exemptions are made with the intent to help small businesses grow and sophisticated asset-rich token offerings must be willing to make it through the long haul i.e. registering themselves with the SEC.

Contrary to the above, the European Union takes a more complicated approach towards STOs. Each member country has its own regulations built around the concept, but they all need to follow the basic guidelines laid down by their central governing body, EU Commission.

It has to be noted that European Commission has been pondering over releasing a definitive law on cryptocurrency for a long time, and this approach has rather stalled the laws on further developments in the crypto world, specifically those related to emerging concepts like STOs.

As a starting point, the law does not explicitly define an STO. Nevertheless, experts in Europe have interpreted STOs as legally recognized transferable securities under the Directive 2014/65/EU of the Markets in Financial Instruments Directive II, or the “MiFID II”.

MiFID II, therefore, is seen as the main regulation while offering security tokens within Europe.

The next major legislation is the EU Prospectus Regulation that basically asks every token issuer to roll out a complicated prospectus before setting up a Security Token Offering, and get it approved by the appropriate authority. The procedure is long and approval can take up to months.

There are, however, a few exemptions to this. As an issuer, you could completely get out of drafting a prospectus so long as you meet any of these:

You are raising less than 5 million Euros in a year,

You are selling your tokens to less than 150 people in a year,

Further, the member states have the power to exempt public offerings raising less than EUR 8 Million.

A major challenge, however, that every issuer must face is that one has to still comply with every member state’s national securities regulations in place before rolling out the STO in their space.

Europe also boasts of strict anti-money laundering and KYC procedures throughout which are a necessary compliance while offering tokens to European investors or raising investment within the EU.

Overall, interested parties worldwide await 21 July 2019, when the new regulations of the European Union Prospectus Regulation (2017/1129) will become applicable. This is expected to be a major source of relief for STO issuers planning to list and trade securities in Europe. Henceforth, the prospectus regulations and disclosures for small and medium level enterprises have been hugely simplified by the new regulation.

Time to dive deeper into the regulations in place by major crypto-players in EU:

France, at the forefront, recognizes STOs as financial securities.  The French CFM (Monetary and Financial Code) is now coming up with a new regulatory framework to be entered as Chapter V into the Book V of their CFM Code.

The term ‘token’ shall be defined therein, and it can be issued and transferred via a shared electronic registration mechanism. As an issuer, you will now need to comply with the regulations established by the CMF in France.

United Kingdom has taken a controversial stand by refuting the claim that utility tokens can be viewed as securities. In January 2019, the Financial Conduct Authority released a consultation paper CP19/3 on ‘Guidance on Cryptoassets’.

The consultation paper defines Security Tokens as tokens with specific characters such as shares or debt instrument, and are included within the ambit of the guidance.

The objective of this paper is to ensure that all transactions surrounding cryptoassets are appropriately interacting within legal parameters and to provide regulatory clarity to market players.

It also clarified that in light of Brexit, EU law would still continue to apply in the United Kingdom till 2020, thus making the EU Prospectus Guidelines and MiFID relevant and applicable.

The final paper is due to be released in summer 2019.

Germany, is ahead of the game in the crypto-world as its financial regulator, BaFIN (Federal Financial Supervisory Authority) recognizes public offerings based on cryptocurrencies. It has identified all regulations, and is willing to authorize Security Token Offerings, provided they comply with German regulations.

Having said that, BaFIN has examined each offering on a case-to-case basis. Fundamentally, the regulations under the European Markets in Financial Instruments Regulation (MiFIR), the European Market Abuse Regulation (MAR) and the German Securities Trading Act (WpHG) must be strictly adhered to. Detailed prospectus information as set out above in this article, is also a prerequisite.

Switzerland, having the reputation of a finance friendly destination, clearly recognises STOs as asset-backed tokens. As per FINMA (Financial Market Supervisory Authority), a security token is the same as any other security, such as stock or bonds.

So, as an issuer you need to apply for a ‘securities dealer license’ just as you would, were you offering traditional stocks or shares in a company. In line with EU Commission guidance, KYC is a mandate. Additionally, all the other regulations that apply to regular financial securities, like AML (anti-money laundering), recording of financial transactions, and market regulation, etc. also need to be strictly adhered to.

Notable Mention: Malta, a small and otherwise ignored cluster of islands is one of the most crypto-welcoming countries in the World. It has three distinct laws regulating STOs – Malta Digital Innovation Authority Act, Virtual Financial Asset Act, and Innovative Technological Arrangement and Services Act.

These laws together govern tokens and their exchange, offerings and transfers through digital ledger technology (DLT), provide detailed guidelines on smart contracts, STO structuring and as well as compliance requirements.

In conclusion, as of today – most of securities regulation depends on national laws of member nations. Europe still needs to bring forward a united stance on Security Tokens.