All About Olympus DAO Staking Development 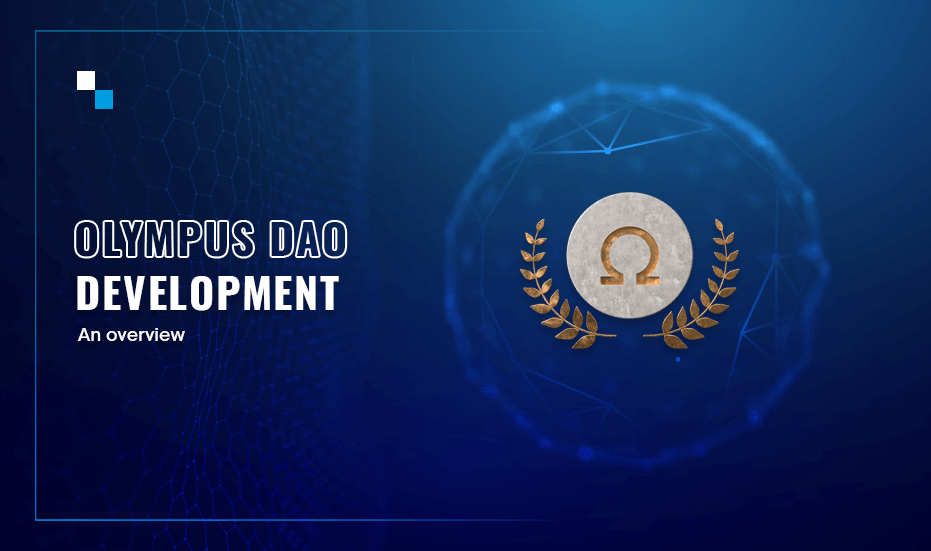 Getting a lot of attention in the cryptocurrency and blockchain industries is still a challenge for many. Sometimes a few ventures go apart, leaving you with the question of what will happen to the prospective Starchild. However, the Olympus DAO stake is definitely here to stay.

In fact, it seems like Olympus DAO development has become a brand new trending topic to watch today. The ultimate goal of developing the first totally decentralized reserve currency has attracted a tonne of attention.

Olympus Token development and jaw-dropping four-figure APYs are drawing investors to get the highest returns in the cryptocurrency space. Olympus DAO is basically a community-owned decentralized reserve currency with an average annual yield (APY) of up to 8,000%.

Although stablecoins have a stable value similar to that of fiat money, some traders choose to purchase them to increase their profits from trading. As a result, stablecoins may lose value if the price of the dollar declines. Olympus DAO enters the scene at this point.

An Olympus DAO development company builds “OHM” free-floating reserve money to overcome this difficulty. By focusing on the expansion of supply rather than price appreciation, the whole procedure maintains its purchasing power regardless of market volatility. All users who stake OHM receive returns that are produced in two ways. The initial one comes from the protocol’s sale of fresh OHM coins and another from the Treasury’s profits produced through a cutting-edge technique called “bindings.” To learn more, let’s look at some data and details!

DAO holdings are now measured in the millions. In order to prevent any negative effects from the issuance of additional tokens, stakers preserve their share of the market capitalization, ensuring that the yield stays high. Even more impressively, widely used crypto protocols developed earlier now possess substantial hordes of their native cryptocurrency with billions of dollars in value.

According to a study, the growth in user count in the DAOs of DAOstack and DAOhaus is depicted in two phases. Around 5,397 new users validated the project in June 2019, and nearly 5,000 of them joined the same DAO. The new xDai DAOs are represented by the space between the dark and light green lines that occurred in February 2020. Aside from these two extraordinary jumps, user growth was consistent and far more subdued.

Olympus DAO Staking: Getting The Insights 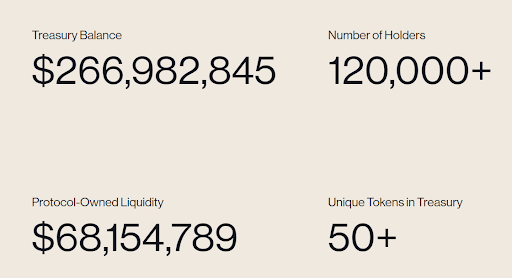 The major method of value accumulation is seen in Olympus DAO staking. To receive rebase rewards, stakers claim their OHM on the Olympus. As long as there is 1 DAI in the reserve to support and create a new rebase reward, every 2200 Ethereum blocks are reported every 8 hours.

The smart-contract level guarantees how long Olympus can continue emitting according to its current rate. Olympus DAO OHM: Treasury inflows or adjustments to the reward rate are observed through Olympus DAO OHM. Olympus Token development is a long-term, passive approach. As soon as your OHM DAO stake grows, your cost basis will decrease until it converges to zero. The increase of your staked OHM balance will outrun a decline in price, whether the market price of OHM falls below your initial cost of purchase or not.

When a reader stakes, he earns an equivalent amount of sOHM (staked OHM) and locks OHM. At every step, the balance is automatically sped up as sOHM is transferrable and combined with other DeFi protocols. When he unstakes, he gets an equivalent amount of OHM and will lose the impending rebase award as well. Keep in mind that the forfeited reward only applies to the amount that has not yet been staked. According to the protocols of Olympus DAO development company, any existing staked OHM will remain eligible for rebase incentives.

Hire Us to Create Your Olympus DAO Platform

In simple words, Olympus DAO staking is a method of putting a coin to work and receiving incentives in return. A validator posts collateral and then participates in the system’s method for transaction verification. Olympus DAO development company helps him throughout the case. Proof-of-stake (PoS) is a consensus technique that enables validators to stake currencies and validate blocks. They may not earn block rewards if they submit a fake transaction to the network. The probability of the validator receiving a block is inversely correlated with the number of tokens they stake on the total network of staked coins. For instance, if you have 25% of the total currency staked, someone with 10% of the total coins staked can “win” the block reward.

Olympus DAO development is a method of profit distribution. Giving your coins to the exchange allows validators to use them as node validators. The exchange staking greatly reduces the danger associated with validation and maximizes yield while requiring the least amount of work and expertise from Olympus DAO developers. All in all, the main goal of Olympus DAO OHM is to stake, hold, and compound with the participants’ dominating approach. Staking enhances the price of the treasury and rewards individuals who invest in OHM. Everyone obtains the same percentage of profit using sOHM while simply requiring holding.

Olympus development has a staking mechanism, bonding mechanism, protocol-managed treasury (PMT), protocol-owned liquidity (POL), and more to limit supply expansion. The Treasury automatically distributes the OHM token to the stakeholders with the profit made by the sale of bonds. By guaranteeing a high rate of return, Olympus DAO staking entices OHM holders to stake their tokens. Additionally, it motivates more investors to purchase Olympus DAO OHM on the open market. The procedure keeps the pool’s liquidity high while simultaneously maintaining a high price for tokens. Some important details illustrating the precise operation: 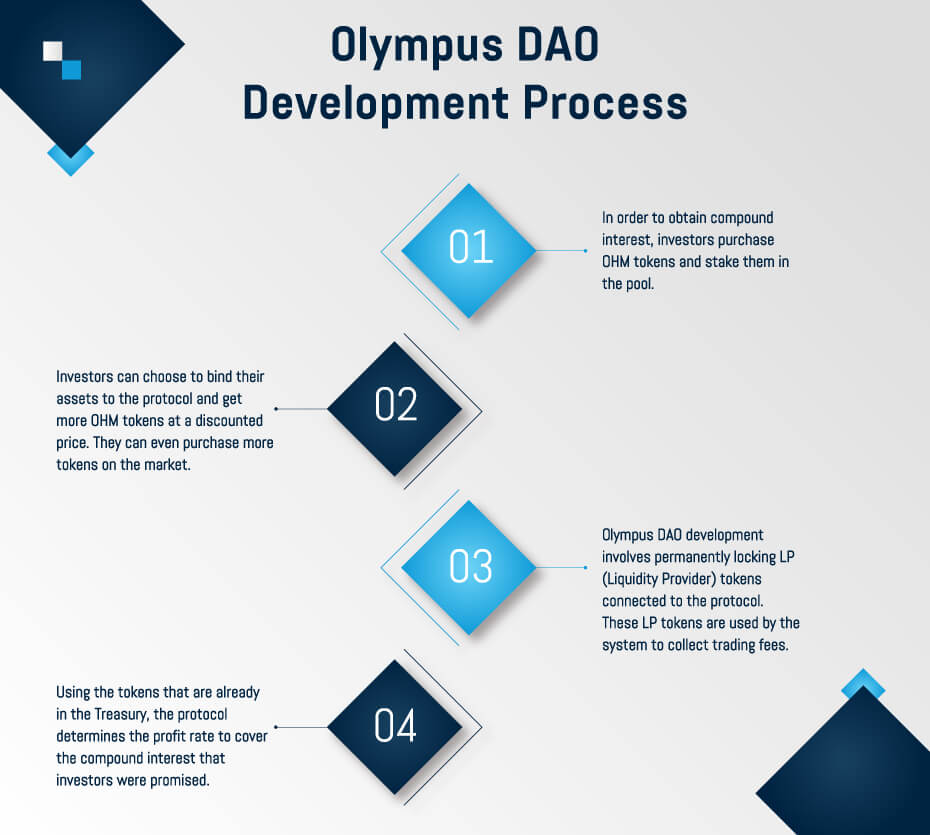 As seen, investors are enticed to purchase OHM tokens on the open market and engage in more bonding because of the high rate of returns. OHM generates a free-floating value that its investors may depend on at all times. Assisting Olympus DAO development company has recently become a popular topic of conversation among people of all ages. Given the data, it is safe to assume that there will be a continued demand for Olympus DAO in upcoming years as well.

Is it safe to stake Olympus tokens?

As of November 2021, Olympus DAO had been operational without experiencing any significant hacks or security lapses. Olympus DAO development has amassed assets worth US$4.45 billion over this time and sparked numerous forks with a high level of investor trust. It is run by a visible, extremely active team of Olympus DAO developers that frequently collaborates with the local population to enhance the protocol. One of Olympus DAO’s advantages is that, without the need for human compounding, the daily triple auto-compounding produces increasing profits. It could, however, be vulnerable to hazards like smart contract vulnerabilities or exploits such as DeFi protocols. Olympus does not currently have any obvious warning flags, but as with anything in cryptocurrency, always invest what you can risk losing.

Olympus DAO development is now the third-largest DeFi project, with a total value locked of approximately $3 billion and a $29 billion balance. This remarkable rise is the consequence of cutting-edge financial technology that uses treasury inflow and protocol-owned liquidity. Other cryptocurrencies like ETH and DAI are employed by Olympus DAO development company that increases over time to maintain the price of the OHM token. As with a global reserve currency like the US dollar, however, the objective of Olympus DAO OHM is to eventually serve as the basis for all DeFi products.

However, risks are always higher when using a new investment tool, especially if you are using something as novel and ambitious as OHM. It’s crucial to consider the risks and benefits and assess your tolerance for innovative investment technology. Olympus DAO developers at Antier are here to help you out! Now is the ideal time for businesses to participate in the Olympus token development and learn more about the DAO construction process. Contact Antier today for further details