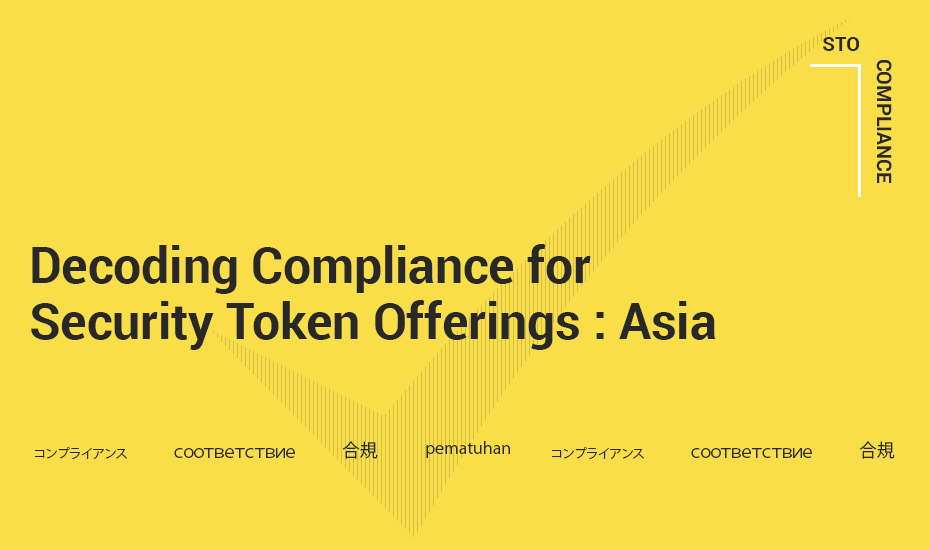 Asia has always been the biggest embracer of technology, so it’s no surprise that cryptocurrency has had most of Asia in a pretty excited state. Japan has been the pioneer in innovating, floating, and diversifying the various forms of cryptocurrency along with related products and services.

Asia also holds a fair share in the biggest financial markets and as such is always game for the next big product. In the current atmosphere where STOs are being pitched as the next stock exchange of the World, let’s glance through how well Asian regulations are braced to receive cryptocurrency services.

Starting with the originator; Japan has always been at the technological forefront in the cryptocurrency world. It’s more surprising then that Japan is yet to release a clear financial regulation on Security Tokens and its public offering.

The Financial Services Agency (“FSA”) of Japan has stated that it’s about to release a clear legislation by summer 2019. Experts opine that most likely, security tokens will be included in as traditional financial securities. The Financial Instruments and Exchange Act (FIEA) of Japan shall be the governing regulation for digital tokens.

As an issuer, you’ll be required to register yourself under the national securities law.

This involves providing certain pre-requisite disclosures and then filing a Securities Registration Statement (something like a prospectus), where you give detailed information relating to your offering.

The FIEA does provide some exemptions from the above process, however, for that you need to be a “Collective Investment Scheme”. Now, a Collective Investment Scheme carries its own set of limitations such as, pitching being allowed only to qualified investors (organized and sophisticated investors – pension schemes, corporations, etc.). In case you are pitching to non-qualified investors, the number should not exceed 49.

Singapore enjoys a distinct position in the financial world with the Monetary Authority of Singapore (MAS) being one of the most reputed and emulated financial regulators in the World.

It’s interesting to watch the MAS follow the lead of the West, and provide Security Tokens the same status as a traditional security. As such, STOs fall within the ambit of the Securities and Futures Act (CAP. 289) (the “SFA”).

Further, the MAS considers every digital asset as a security unless:

You aren’t raising more than 5 million SGD in a year;

You aren’t soliciting to more than 50 investors in a year; or

The MAS would also generally ask of you to prepare a detailed prospectus detailing your offer and get it approved in prior. Further, you also need to be compliant with the KYC procedure. It must also be noted that in case your investors are based outside Singapore, you are asked to comply with the securities laws of that country as well.

The regulatory authority of Hong Kong considers dealing in tokenized assets such as Securities a regulated activity. Simply put, this requires an issuer operating within Hong Kong or pitching to investors based in Hong Kong, to obtain a license.

Similar to other jurisdictions, you could go through an exemption, but reasonable limitations apply. For example, you cannot bring on board more than 50 investors, or you could only pitch to ‘professional investors’ such as high net worth individuals or corporations.

Ranked as one of the most innovative countries worldwide, Taiwan has made a bold declaration that it shall release a new legal framework specifically for tokenized asset offerings such as security tokens, sometime in mid 2019.

The Russian lawmakers introduced three new bills relating to cryptocurrency and tokenized assets in 2018 – the draft bills on ‘Digital Financial Assets’, ‘Amendments to Part One, Two and Four of the Civil Code of the Russian Federation’ and on ‘Alternative Methods of Fundraising (Crowdfunding)’. However, we are yet to hear any development on these bills and they remain at the tables of the Russian government.

In the meantime, any issuer expecting to launch an STO in Russia should just as well prepare themselves for a public offering.

In conclusion, while it can’t be denied that with multiple countries promising to issue crystallized regulation, 2019 is turning out to be a much anticipated year for digital assets, and particularly security token offerings. However, what remains to be seen is whether the proverbial middle-man is indeed done away with, and how well the markets adapt to law.